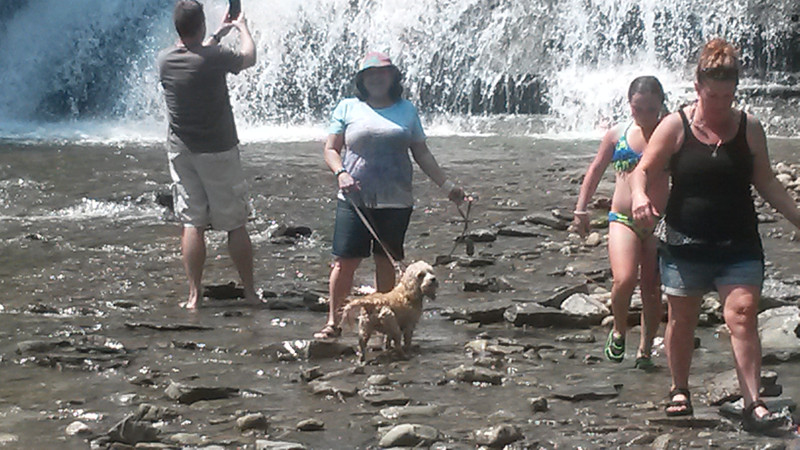 A few decades ago a bunch of role playing gamers decided to spend a weekend camping, eating and playing games. So they rented a campsite at Stony Brook State Park, laid in a supply of games, food and (I have no doubt - they were college age) beer. They also decreed that no strenuous physical activity would be allowed, so the gathering became known as Slugfest.

These days they rent the group camp at Stonebrook and their kids, grandkids and many of their friends are a part of the weeklong festivities which include a turkey dinner on the 4th. My son Alan has been part of the gaming group that meets once a month to venture off into some imaginary land filled with adventure and action, so naturally he and his family started to attend Slugfest. That's how Judy and I got involved, we wanted to see the grandkids and soon found a home with all the other crazies there.

Attending this year was a bit of a challenge. The group camp lies at the bottom of a single lane gravel road that drops a couple of hundred feet to a spacious meadow above the middle falls. We had negotiated this road with our popup camper, but the 37 foot RV is a whole different challenge. There was no way were going to miss Slugfest, so I put the White Goddess into low gear and started down.

First problem - the gates to the group camp are about one foot wider than the RV, I measured them before going through them. Taking careful aim and glancing frequently into the side mirrors I slowly passed the wooden portals of doom and headed downward. Threading a path between the steep drop on the left and the overhanging trees on the right I crept onward. Eventually I reached the part where you can look down on the campground and noticed that everyone down there was watching me. I didn't see any money change hands, so I doubt they were taking bets on weather I would come crashing over the edge, but they seemed inordinately interested as I crept downward.

Actually it was rather anticlimactic; I made it to the meadow without anything that would make a great story to tell in my dotage. I swung the RV around the wide meadow and settled under a shady tree, disconnected the trailer, leveled it, opened up the slides and wandered off to greet my fellow campers.

The next day Judy and the rest of the crew joined us. For the past few years Judy's daughter Raina has spent most of July with us, along with her sons Zander and Franti. The first time we dragged her to slugfest she was skeptical. Raina is very into fashion (she graduated from the Fashion Institute of Technology) and really wasn't a dedicated camper like her mother. We gave her little choice, however, as we closed the house and if she wanted to sleep in a bed she had to come with us. By the time we turned in the first evening she was a dedicated slug and has come back every year since.

We got to use our new electric generator on this trip - no water, electric or sewer hookups in the group camp. I have sleep apnea so I need to sleep with a CPAP machine which requires 110 volts and it was getting warm so we needed fans in the RV or we would bake. It worked very well and was so quiet we couldn't even hear it in the RV.

There was one unanticipated problem, however. Our curious grandkids were fascinated by the pedal that flushes the toilet. We really didn't notice until the toilet filled up and wouldn't flush on the second day. This left us (read me - there were no other volunteers) to either take the trailer up the one lane gravel road and across the bridge to the dump station, or find a 5 gallon bucket and carry the effluent 4 gallons at a time (would you want to spill anything?) to the bathroom some 300 feet away. Do the math - 35 gallon tank divided by 4 gallons makes nine trips. Some further math shows that 4 gallons at 8.35 pounds a gallon makes nine trips with a 33.4 pound bucket. I will not elaborate on the olfactory consequences.

We since have learned of the existence of the satirically named "Honey Wagon", a wheeled conveyance with a large hose that connects to the trailer's discharge pipe and simplifies this odious task. It now has a permanent home in the bed of the pickup waiting for the next time it has to be used.

Over the next week we gave multiple tours of the Gypsy Wagon and slugged with the best of them. Having an oven available allowed us to contribute cornbread and other goodies to the communal meals and sleeping on our queen size bed was very satisfying. Ah the depravations of rough camping…

One more challenge remained. The freshwater tank holds sixty gallons, and since we had used 35 of them flushing it wasn't long before the water tank was dry. A little more math showed that there was no way I was going to haul water five gallons at a time from the bathroom 300 feet away, so it was off to town to buy another couple hundred feet of hose to reach the faucet. Problem solved - but now I had to find a place to store the additional hose.

The sole remaining hurdle was to get the Gypsy Wagon up the hill and back home. When we were all hitched up ready Judy went up the hill to make sure that no one was going to meet us half way. So putting it into low four wheel drive I started out and had no problem at all going up the road, the truck has plenty of power and easily we ascended

I was smugly thinking how easy it was when I made it back to our berth at Dave & Helga's place as the sun was setting. Being rather tired and in a hurry to beat the darkness I forgot to move the hitch into maneuvering position. This slides the hitch back 18 inches in the truck bed so the trailer cannot hit the back of the cab on a sharp turn. Did you know when you are moving slowly enough the trailer can dent both sides of the cab without making a sound? If you didn't you do now, as I have learned to my great regret.