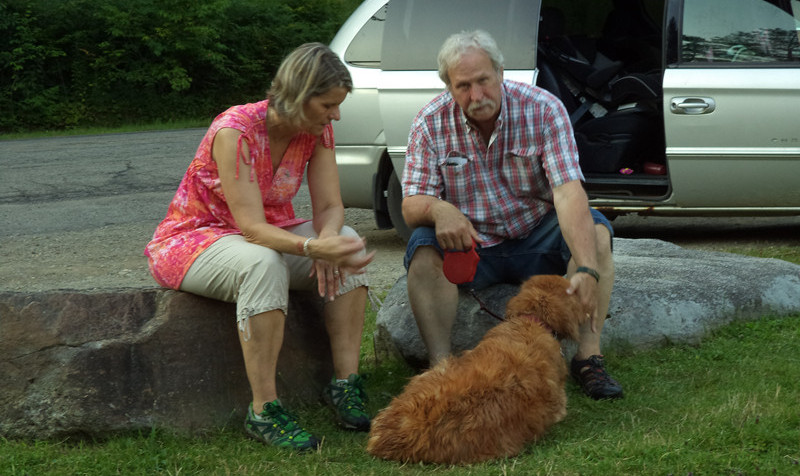 I've been going to Allegany State Park for just about as long as I've been alive. When I was a kid it was a three hour drive from Buffalo, long before the Interstate system cut that time in half. I remember the skunks who took up residence under our cabin's porch and my father (deathly afraid of trichinosis) boiling the Polish sausages to death before putting the tasteless tubes on the grill. Then there was climbing over Thunder Rocks with my brother screaming like crazy fools.

Judy and I have been going there for as long as we have been together, first renting a cabin, later in our tent trailer and now with the new RV. Although we prefer the Red House side of the park, the campground was full so we had reserved a week on the Quaker side. Having learned our lesson about tolls when pulling an RV, we opted for the two lane roads and made a leisurely drive to the park from our home in Rochester. Passing through Ellicottville was a bit nerve wracking, there always seems to be a festival or flea market or mass event all summer long and people, cars and critters are zipping across the streets with abandon. It takes time to stop our rig and I get nervous about driving through crowds.

We reached the park and discovered the driveway to our campsite was only about a foot wider than the trailer's wheels with some serious ditches on either side. I'm lousy at backing this thing up – the dents on the cab of our new pickup will testify to that! – and I was not at all happy about getting in there. The good part is that your neighbors when camping are almost always willing to lend a hand and I soon had a guy who drives 18 wheelers for a living directing me into the site. It still took a lot of backing and forthing but after a while we were in place.

Before we go on I have to explain how the leveling system works on the Gypsy Wagon. You open the side storage and push a button and listen as the gears lower two legs at the front of the trailer. Eventually – you're moving 8 tons of trailer, it isn't going to be fast) – the legs hit the ground and raise the trailer. After a little more time the trailer raises high enough to disconnect from the hitch in the bed of the pickup. As I found out on the first trip you damn well better remember to lower the tailgate before you drive off or you dent the brand new truck. I haven't made that mistake again – yet.

However, this time the trailer must have been studying to be a stork because only one leg came down. It was starting to get dark by this time, and there I was unloading the front storage compartment to peer inside with a flashlight to find out what was going on. I discovered that there is a bar running from the powered leg to the slave leg so that they turn in unison, but the connecting bolt was broken. Not a difficult repair, but it was after 8 PM on a Sunday night with a 20 minute drive into a small town. Anybody want to take bets on the odds of finding a1/4" bolt in time to stabilize the trailer so we could sleep in it?

The trailer seemed to be OK on only one leg, even if it was obviously twisted a bit, so we fired up the pickup and headed for town. For once the Travel Gods were feeling generous and we reached the auto parts store minutes before they closed. They even had a bolt that would work, so I bought two, just in case.

Returning to the campsite I removed the broken bolt and threaded in the replacement, only to find the original bolt was a metric thread and I had an English thread. As a tool nut I had a drill and the correct taps to put new threads on the gearbox and with a little trial and error got the two legs both the same length, and somewhere a little before ten o'clock we finally were able to go inside and draw a sigh of relief. Or so we thought…

We have two cats, Curious George and Harry Houdini. We didn't intend to have cats – in fact we had to give away our cats shortly after we were married because my cat allergy was making it difficult to breathe. I hated to do that because I'm a cat person. (Judy is a dog person. She's also a horse person but we fortunately have no place to keep a horse!) In any case, one fine June day a few years ago I went to the garage to get something and found three tiny gray blobs wiggling on top of our camping equipment. The gray blobs were kittens about four weeks old, the very pregnant stray cat in the neighborhood had apparently moved her litter to our garage not many hours before.

Since we didn't need three more stray cats in the neighborhood I brought them inside. All right – they were so freakin' cute there was no way I could resist them. The plan was to raise them until they were big enough to find new homes, which involved running out for kitten formula and little tiny kitten baby bottles. We hand fed them for several weeks and took them with us everywhere as they needed to eat every five minutes or so – at least it seemed that way. We even took them with us to Slugfest, a campout we have gone to for several years at Stony Brook State Park. Feeding there was no problem as the kids lined up in droves to feed the kittens.

Curious George has an obvious name – from day one Georgie investigated everything and was on a lap as soon as anyone sat down. Harry was the one who escaped from the cage no matter how many exits we blocked. Harry is the original scardy-cat, she makes herself scarce when strangers are about. Oh yeah – they're both female, but the names were attached long before we found that out. They don't seem to care.

We wanted to take the cats with us on our travels, so on the trip to Allegany we would see if we could turn our two outdoor prowlers into house cats. First decision was what to do with them as we traveled. Looking at the trailer we decided to let them travel in the bedroom. A little time with the table saw and I came up with a construction to block the space between the door and the staircase so the cats couldn't escape.

Now back to the main story line: After finally getting the trailer leveled we opened the bedroom door, but there were no cats. What we hadn't noticed was when the slideout for the bed was slid in there were two large holes opened up beneath the bed, holes perfect for unhappy cats to hide in. When the slideouts are in there is absolutely no space in the trailer, so until we could get the cats out we couldn't open up. In frustration, I ended up fishing through the holes and determined we could slide the bed out without puréeing the cats, so we carefully opened up, then slid the bed back in a few inches. Judy solved the problem with an inspiration – one can of cat food by the hole and they came out in only minutes. The cats have only had dry food, so the treat of canned food brought them running.

Over the week we solved such problems as where to put the cat box and found that cats are truly nocturnal. They love to race from one of the trailer to the other; running over the dog and across the bed became a sport in the cat Olympics. Oddly enough, both cats didn't seem to mind being indoor cats, neither one attempted to escape all week long.

The other field test we made during the week was on our newly acquired honey wagon. If you haven't camped in an RV, they have large tanks for what is euphemistically called gray water and black water. Gray water is the drain from the kitchen sink or the shower, black water comes from the toilet. Ideally your campsite has a sewer connection so all you need is a hose from the trailer to the sewer, but life is far from ideal.

After our adventure at Slugfest our next purchase was a 35 gallon honey wagon. If you haul out your calculator and multiply 35 gallons by 8.35 pounds per gallon you get 292.25 pounds of water. A full honey wagon weighs a good 300 pounds – it doesn't roll very easily over gravel, especially when the wheels pop off after the first few feet.

In preparation I had bought a hand winch and mounted it so it could be attached to the trailer hitch. By placing a couple of the 2x10s we used to level the trailer on the tailgate I could winch the honey wagon up to the pickup bed and drive it to the dump station. We can go about 4 days or two loads of laundry before we have to haul out the honey wagon.

Naturally, it rained most of the week, but we had a great time anyway. The weather did cooperate for a visit to the Cattaraugus County fair, a wonderful rural fair that has most of the traditional events of a rural fair. We love seeing the 4-H kids and their animals, the quilts and handcrafts, the horses and simple, home-made exhibits.

Judy had a great time with the little girl next door, they had a nail painting party and tried out several colors. Our little friend was in love with Shira and found petting a dog with wet nails wasn't a good idea.

Our friends Dave Shaver and Helga Lubbers joined us for part of the week with their venerable VW camper and Lucy the Golden Retriever.

We went on a great 3 mile hike with the dogs, at the end of which both dogs were covered in mud. Science Lake was only a short drive away, so we put both dogs in the bed of the pickup and off we went.

Both dogs made a beeline for the water and had a great time swimming around. Unfortunately Lucy is a senior citizen in the dog world and is going deaf; she completely ignored our calls and swam in circles in the middle of the lake before heading for the far shore. Judy and I watched as Dave and Helga slogged through the bogs at the far side of the lake hollering futilely for Lucy to come back. Eventually she tired of the game and came ashore to be escorted to the pickup and dried with the towels we keep for just such occasions.

By the end of the week we felt at home and had pretty much figured out where to store things and how to dance around each other in a limited space. It was starting to feel like home.