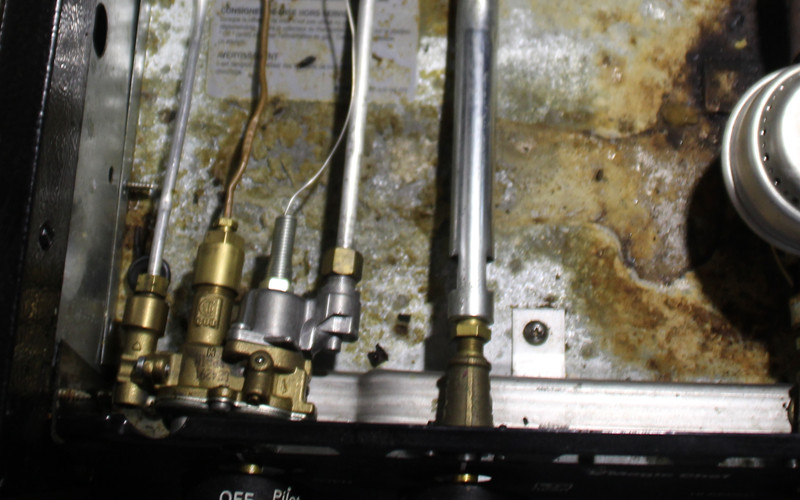 Life on the road can get tricky when you need to fix a balky appliance. While we were in Oregon visiting our son our oven decided to die; the pilot light would not stay lit. In trying to diagnose the problem I lifted the top of the stove and found a remarkable collection of dried and/or gooey crud under the burners, so before I could go any further some massive cleaning was required.

The oven control was a simple beast - one piece, no adjustments - it either works or it doesn't. Flashlight in hand I found the model and serial number of the oven. Thus armed I packed up my computer and walked to the laundry room of the RV park - the only place that had a strong enough signal to connect to the Internet.

Google is a wonderful thing, all I had to do was type in the model number of the oven and I found several sites that offered replacement parts. Naturally, I found out that the oven control valve is no longer available. Not to worry, the supplier stated confidently, we have a replacement that will solve your problems. So I forked over about $100 and waited for the part to arrive at our son's house.

And waited. And waited. Finally, the day before we left Oregon it arrived, so I opened the top cover to find I had to remove all the burners in order to disconnect the main gas manifold so that I could install the valve. A dozen or so screws later the manifold was free and the counter was covered with assorted parts, wires and screws. Disconnecting the various tubes from the valve I installed the new part and reconnected the tubes.

Off to the laundry to look up local pipe suppliers on the net; fortunately one was only a mile from the RV park. Off to the supplier to discover the fitting is proprietary - you have to get it from the manufacturer.

So I called the supplier and worked my way through the automated phone system and finally talked to a technician. The specs on the valve said it should work, it was an exact replacement. Yeah, right! Eventually we decided to have him send a replacement for the tube that goes from the oven valve to the burner in hopes that the fittings would be compatible. The only problem was we were leaving town, so I arranged to have the tube sent to the RV park we would be staying at in Yellowstone.

Sure enough, the tube was waiting when we arrived. I'm sure you won't be surprised that it didn't fit. After several more conversations I finally sent the valve back; they generously didn't charge me for the tube and let me keep it - it cost more to ship it than it was worth.

Once again I searched the Internet - at least this time I could stay in the RV as we had a good signal in the RV park. Eventually I found a supplier that still had one of the old valves in stock, not only that but it was half the price of the valve that didn't fit!

The only problem was it couldn't get there before we left Yellowstone, so I had them ship it to Wisconsin. Wisconsin, you ask? My daughter's best friend in the small Pennsylvania town where we lived when she was a teenager was living in Wisconsin and we planned to visit her and her and her son on our way, so she agreed to hold on to my part until we arrived.

By this time I was an expert at removing all the burners and installing the oven valve, having done it numerous times. I did the deed one final time and miraculously it oven worked! To celebrate I baked a couple of loaves of bread and we all enjoyed the fruits of my labor immensely.

According to my spreadsheet it took 21 days and 2002 miles of travel to complete the repair. Persistence is a quality that is required for life on the road.