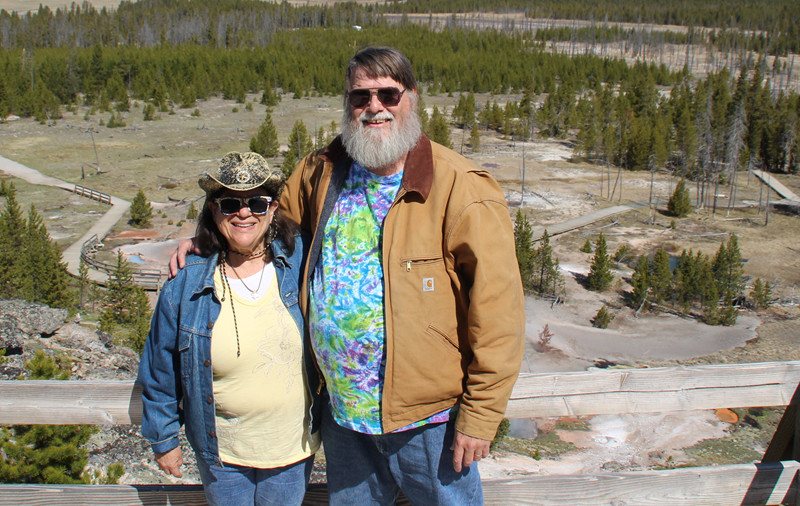 One of the delights of exploring the western part of the country is the national parks. We have always wanted to see Yellowstone or, for those of us old fogies who remember when Hanna-Barbera Studios owned Saturday morning cartoons on the TV, Jellystone Park complete with Yogi Bear. We missed Yogi, but found Old Faithful and a host of geologic features and free roaming animals. We soon realized that three days were simply not enough to explore the place.

We stayed at an RV park that turned out to be an hour's drive from the North entrance of the park, once again proving that a little line on Mapquest could turn out to be a whole lot longer than you think it is. Especially galling was the RV park practically at the entrance of the park that somehow didn't turn up in my Internet search. Even more galling was that Sally, our faithless GPS, once again tried to take us to some godforsaken place in the middle of nowhere in the park instead of the main entrance. More galling still was the Judy was right when she told me we were going to the wrong place. 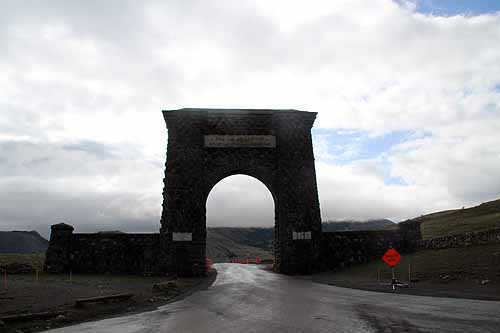 Despite the confusion, we arrived at the main village to find hordes of bison and elk relaxing on the village green. Closer examination revealed that I am very glad I am not the one who has to mow the lawns there, bison poop is very impressive and nothing I want to hit with a mower blade! 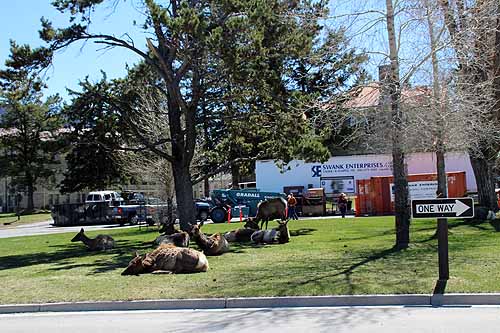 At one point in its history the park was run by the military after some corrupt civilians messed it up big time. Much of the original barracks and housing still exists, so we took a walking tour of the place and absorbed some of the park history. They have an excellent museum which tells the park's history.

We also found that there is phone app that will give you a guided tour of the park, so we loaded it, connected the audio output via Bluetooth to the pickup's sound system and let the phone GPS tell us just what we were seeing as we drove along. Ain't technology wonderful? The guide clued us in to several out-of-the-way places we would have missed without it.

Once again we were reminded how the early explorers of the west were enamored of the Devil, naming half the interesting places out there after Old Nick. On the way in to the park we passed the Devil's Slide, an area where the brightly colored layers of rock were shifted almost 90° to form a slide. At the first hot springs we found the Devil's Thumb (which is not even vaguely thumblike) and only a few paces away was another formation that strongly resembled another bodily appendage. For some reason it was called the Liberty Cap; I guess National Parks have to come up with family-friendly names for the formations. 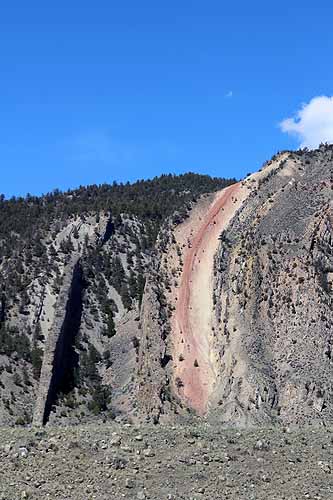 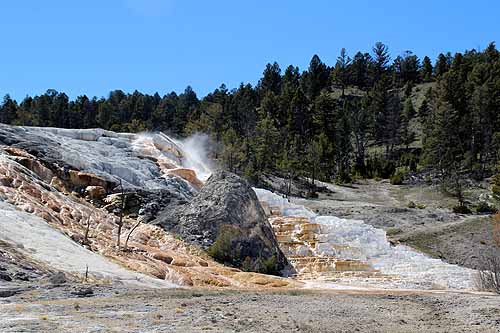 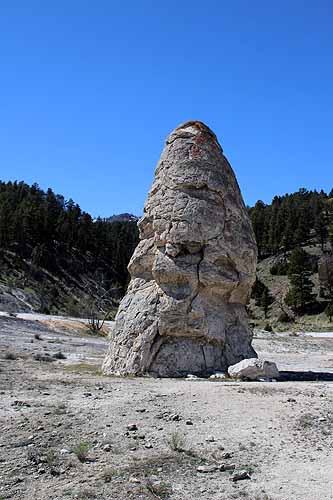 There is so much to see in Yellowstone that you will always miss something. Taking the time to look behind you is usually reccommended, but when we stopped to see a waterfall and looked back at the bridge we had just crossed it was an enlightening experience. It brought back memories of Route 1 in California - fortunately without the RV behind us. 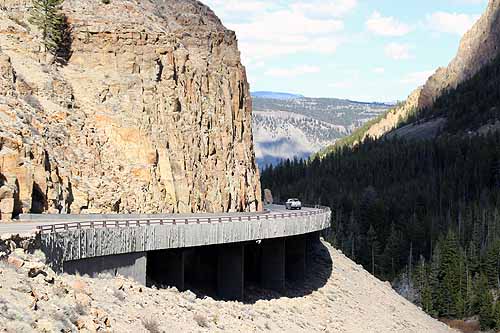 You really have to see the hot pools in person to appreciate the achingly pure blue of many of them, photos just can't capture that purity of color. Then, just a few steps away, you find a great cauldron of boiling mud, as dirty and smelly as you can get. 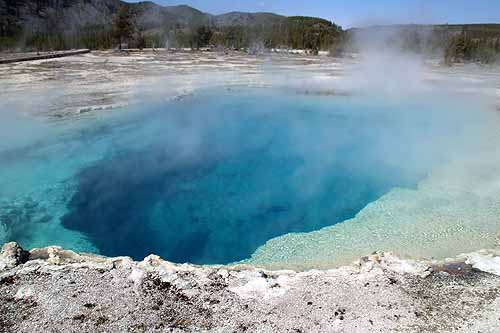 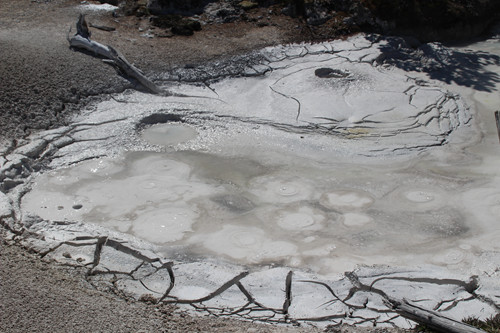 The whole park can be a study in contrasts. We got lucky and one of the irregular geysers decided to perform just as we passed it, the water is spouting maybe 10 feet in the air. 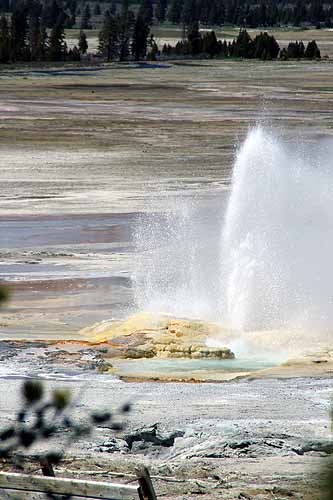 Many of the hot features are accessed by an extensive system of boardwalks. At the entrance to most of them are some very explicit sighs warning you to stay off the mud. Your routine KEEP OFF THE MUD signs they ain't. We found out that at least one of the park rangers obeyed the signs, his ranger hat was sitting at the edge of a steaming pool at the bottom of a steep incline. 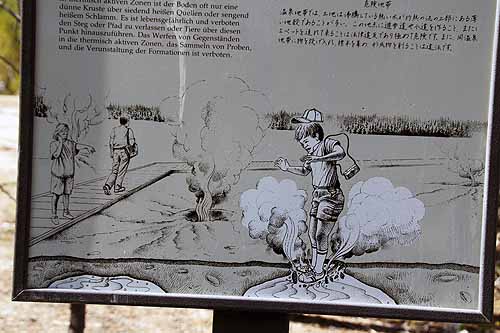 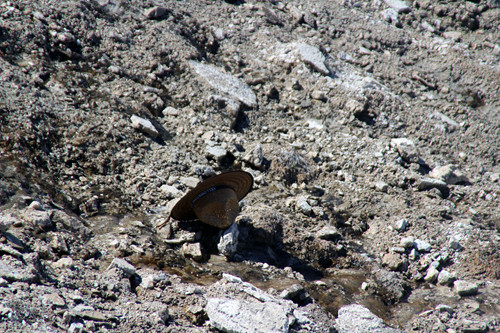 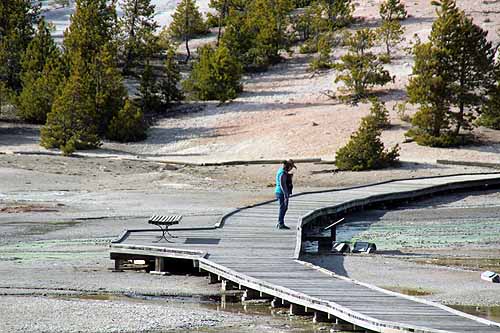 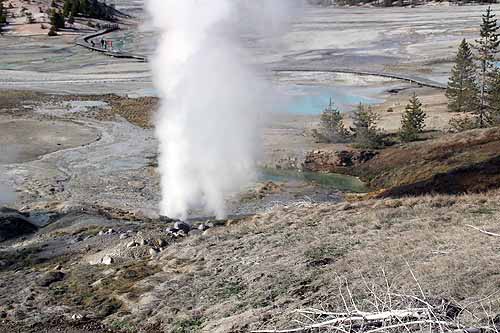 There were frozen waterfalls of stone, boiling waterfalls of water and jets of steam filling the air with dense spray and loud sound. There were wide sheets of water flowing only inches deep over fantastically colored mats of bacteria. We could only wonder what the first people to wander into this place thought of it, there is literally no other place on earth that has so many thermal features concentrated on one area. 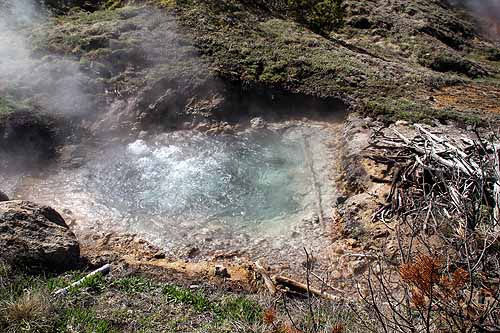 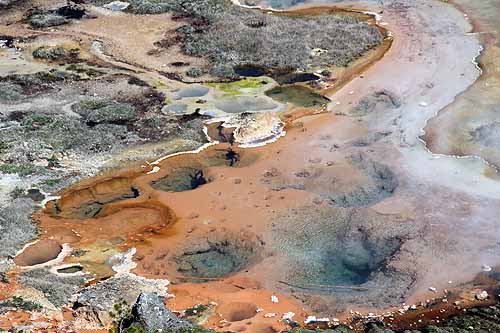 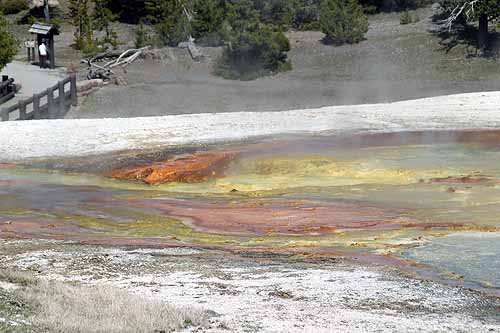 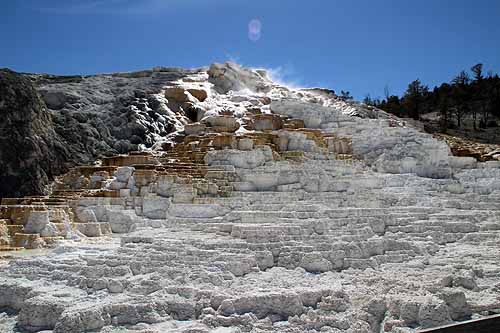 Yellowstone is big, really big. We couldn't really find out how big because much of the park was still closed with snow in the high passes. On our second day we drove from the North entrance to the East entrance watching for wildlife. The critters cooperated, there were bison, elk, goats and even a moose. The moose happily munched on the bushes while a gaggle of tourists (me included) took pictures. 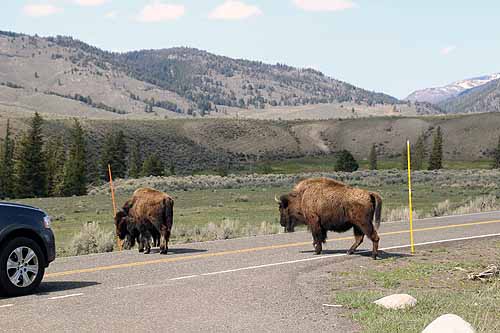 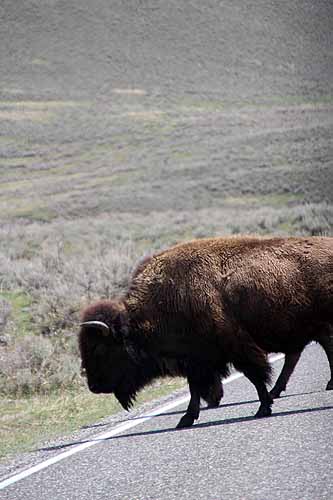 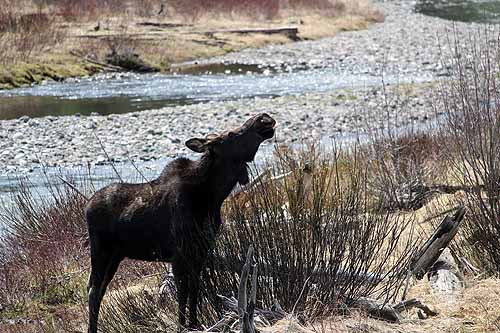 Unfortunately, the Roosevelt Lodge was closed for renovations, it was one of the things I had really wanted to see. So, just for the fun of it, we kept going and drove out of the park on the East, ignoring the Road Closed signs. There we found a small town that obviously depended on the summer tourists. Most everything was closed, but we kept going down the road and soon encountered twenty foot walls of snow on the side of the road as we went higher in the mountains. We were rewarded by a gorgeous view of the mountains in a high clearing before we found the barricades that let us know we really couldn't go any further.

The third day we headed to Old Faithful, no way we were going to miss the world's most famous geyser. Making frequent stops along the way to see the sights we arrived at the visitor center late in the day. We weren't disappointed, the show started just on time and of course we took pictures. 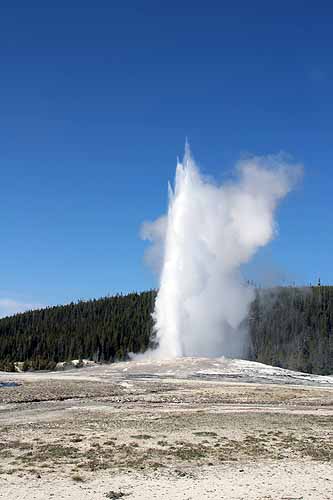 Since it was getting late we ate at the Old Faithful Snow Lodge. Quite an impressive place - the food was very good, if expensive, but what the heck - we were tourists and tourists expect to get fleeced.

All in all, we decided that three days was not enough time for Yellowstone. As I write this in December of 2015 I just made reservations for a full week there just after Memorial Day when more of the park will be open. We can hardly wait.