We started our Canadian odyssey at Vancouver, British Columbia. As someone raised in Buffalo, NY, it seemed odd to cross into Canada without going over a bridge. The crossing was a bit challenging in other ways, since the entrance made a couple of 90° bends, probably a security measure so some terrorist couldn't just drive straight through the border at 100 miles an hour. With 8 tons of RV behind me, that meant I had to take up two lanes to make the turns, I have to thank the other drivers who waited patiently as I maneuvered around the corners.

We have found border crossings to be pretty simple with the RV, and this time was no exception. They didn't even look inside, just made sure we had enough money to support ourselves for our couple of months in Canada.

Things got a little more interesting when we got to the RV park and found out our reservations had gone astray. We lucked out, though, as they were able to find a place for us, even though we had to move to another site halfway through our stay.

Vancouver is a fascinating city, and our first impression was a view of the Port Mann Bridge. It's a very cool suspension bridge and you have to cross it to get almost anywhere from our campground. 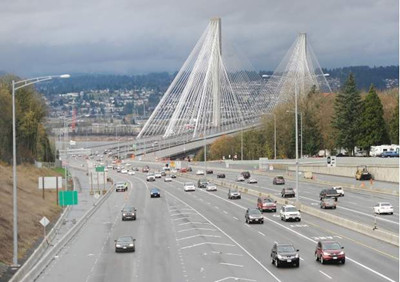 It's also a toll bridge, so we had to go online to create an account to pay the cheaper rate. We are starting to acquire a large collection of toll accounts and transponders - EZ-Pass, Florida, Texas and now BC.

We visited the Aquarium, a beautiful facility with all kinds of fishy life with some very informative and interesting background information available. The aquarium is heavily invested in research and conservation. As I got out of the pickup I grabbed the camera, only to realize the battery was still in the charger back in the RV, so all our pictures were captured on the cell phones. It's amazing how well cell phone pictures turn out, but I was disappointed I couldn't get the detailed close-up shots the digital SLR could take.

We were serenaded by the sea lions and got to see the white beluga whales that the aquarium hosts. There's a lot of controversy over keeping them in captivity; much seems to come from PETA-like fanatics who oppose anybody having anything to do with animals, but there is some real concern there. Even if you oppose zoos, releasing an animal brought up in captivity to the wild without the skills to survive is simply sentencing it to a quick death. Like anything else in this world, there are conflicting opinions that need to be reconciled. As far as I could see the belugas were pretty happy, but watching them for only a few minutes hardly qualifies as an expert opinion. 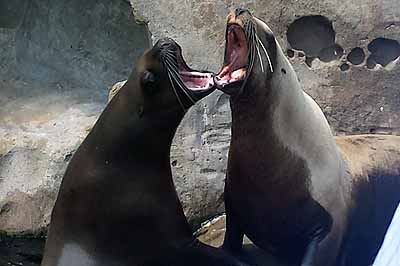 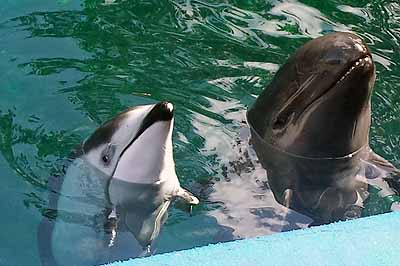 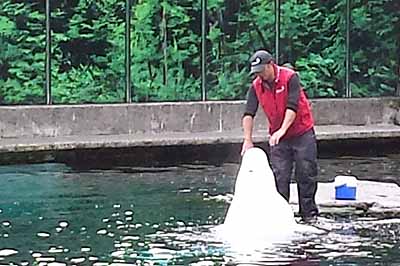 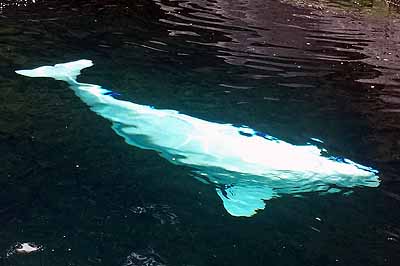 Perhaps it's because we were in Canada where the science deniers have less of a hold, but the Aquarium had a great deal of good information about climate change and hwo it's affecting the sea as well as the rest of the planet. It was nicely done and much of it available to kids, along with suggestions on how we can help make things better. Nice to see rational information on the subject.

One of my favorite parts of the aquarium was the jellyfish - a huge tank full of them swimming around in a beautifully lit tank. It’s like a huge live television without the annoying commercials (or programs for that matter). Then there were the penguins happily marching around doing what looked like close order drill. It was a great day at the aquarium. 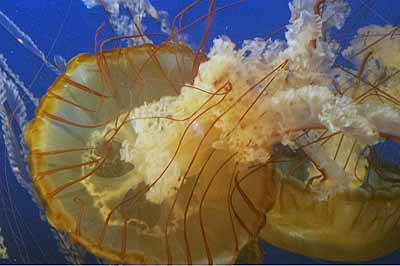 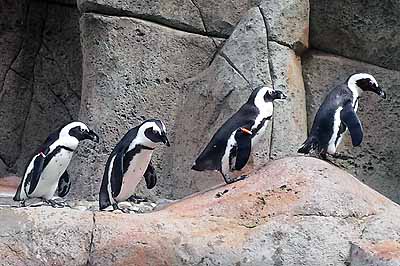 We did visit the Art Gallery in downtown Vancouver, but I don't have any pictures because they didn't let you take any. We are members of the Memorial Art Gallery in Rochester and have reciprocal membership privileges in many North American art galleries, so we got in free. It's a good thing because parking costs and arm and a leg downtown. Let me tell you, it's an interesting experience to maneuver a big, honking pickup around those narrow streets. After several circuits without an open space I finally spotted a small sign for an underground parking garage.

I was too busy driving to get out my phone to translate the garage height in meters to be sure I could fit, but fortunately they had English translations on the sign. 6'6" - the truck would fit with two inches to spare.

Thus assured, I descended the ramp and prayed I could make the turns. Just barely. The multitude of scrapes on the ceiling gave me pause, but only the clunk-clunk of the radio antenna betrayed how low the ceiling was. I did feel a bit like the garbage compactor scene in Star Wars with the ceiling descending, though.

Safely parked, we rode the elevator up to find ourselves in a vast, underground mall that seemed to underlie the entire city of Vancouver. After a couple of false starts and consulting with a Native Guide or two, we finally found our way to the surface.

The museum had a special exhibit on Pablo Picasso that was pretty interesting. I have to admit that his art has never really spoken to me, but I know he has had vast influence on the genre. What I didn't know was what an SOB he was to the women in his life. It was interesting reading, but I don't think I would have liked the guy. As I'm writing this shortly before the presidential elections, I can't help feeling he and Trump would have gotten along splendidly. Too bad Trump doesn't have any redeeming features like being a great artist.

One of the most fun things in traveling is the surprises you get along the way. A fellow camper told us we just have to see the Capilano Suspension Bridge. So we took a chance and checked it out and had a ball. The bridge has been around in one form or another since 1889, and the current incarnation is composed of steel cables and other modern materials, but when you put a couple hundred people on it is sways and pitches in a very erratic way. 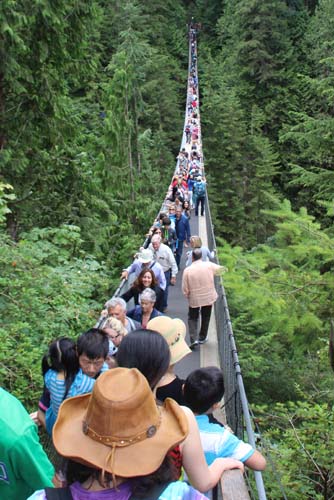 Now I'm not very good with heights, but as long as there's something solid under me I can make out OK; so it was very ironic that I ended up shepherding a very scared ten year old boy across the chasm. 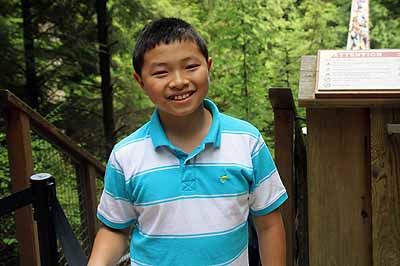 Meet John, my bridge buddy. I ended up hanging on to the bridge cable with one hand and John with the other; telling him stories and talking about anything that came to mind to keep his mind off the bridge. I'm sure the people behind us were not amused at our slow pace, but we made it across alive, much to the relief of his mother. And I have to admit that having John to care for took my mind off the long way down below my feet.

Once you've crossed the bridge you're in a beautiful forest of ancient pines, cool and fragrant. Here's Judy in front of the bigger trees. 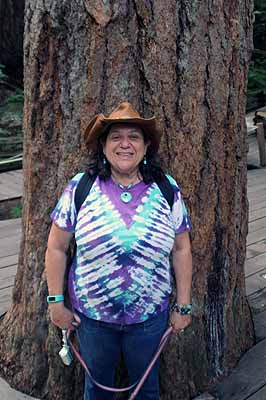 There are wonderful paths to wander, both on the ground and up in the trees. We crossed from one great pine to another on the aerial walkways, and were surprised to find our buddy John up there and very proud of himself for being up in the air. 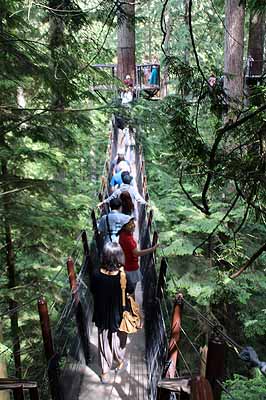 Here's a view from up above of the central square, where naturally you can find junk food and the usual souvenirs. They did balance the sales with some pretty good information about ecology aimed for the many kids wandering around. They had really good ice cream, too. 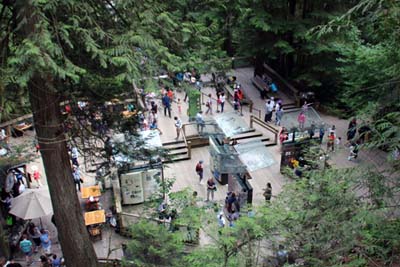 Along the way we stopped for a talk about owls, and made our way back over the main suspension bridge, looking down on the river below. By now there were far fewer people on the bridge so I could take a picture without having to brace myself with both hands to stay upright. 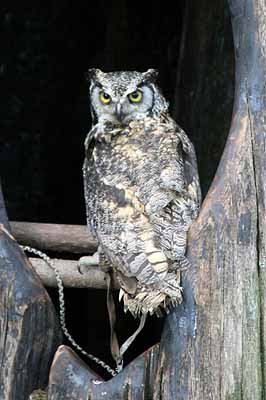 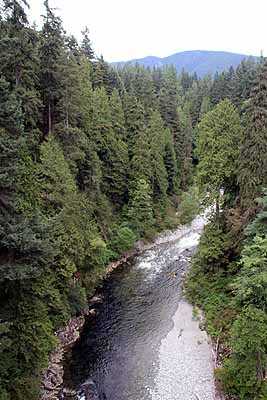 We weren't done yet, The other attraction is a walk beside the cliff above the river. Beside the river but halfway up the cliff, that is. In other words, hanging off the fool thing. Just to make it more interesting there's one part where the walkway sort of bows out and you're hanging over… well, nothing. Tell me again why someone like me with a fear of heights is doing this?

Oh yeah, Judy wanted to do it. 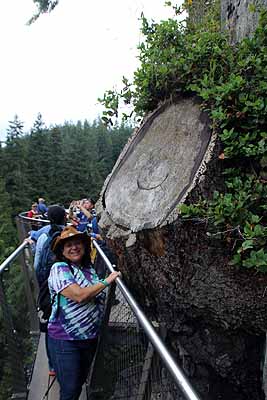 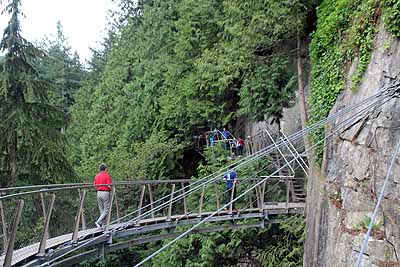 Actually, it was a lot of fun and I was fascinated with the engineering it took to hang the walkway from the cliff. I was also fascinated by how life clings to the cliff and survives, like this tree. 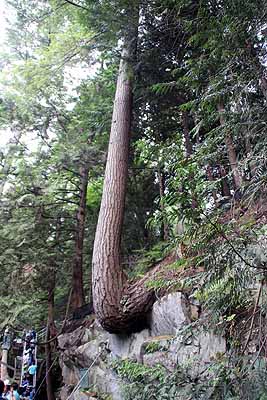 For those of you who are scientifically minded, there was a display of how water erosion works. They have a rock that has had water dripping on it for 15, 25 and 50 years and the results are pretty clear, water and air can have some pretty spectacular results if you wait long enough. 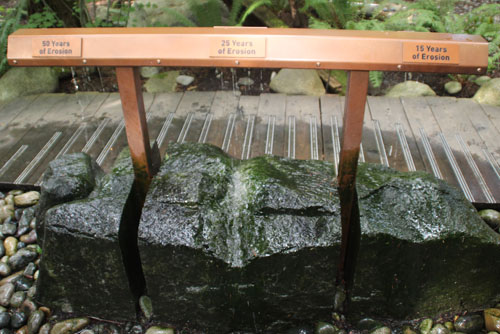 Next up - we head for the hills and Banff National Park.