One of the most memorable aspects of our journey this spring of 2016 has been learning about the indigenous peoples of the southwest. In Albuquerque we got to tour the Indian Pueblo Cultural Center. This beautiful Center is filled with the art, history and philosophy of the Pueblo nations. 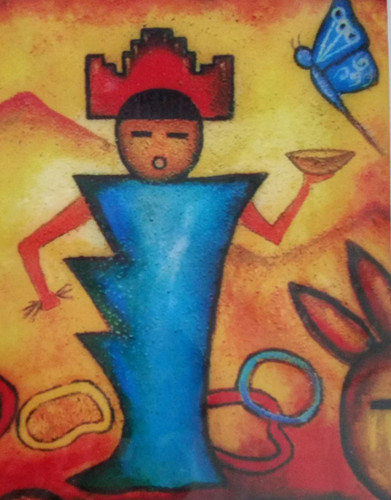 There are 19 Pueblo Nations in New Mexico. Within these Pueblos they speak three different languages, Zuni, Keresan and Tanoan. The Tanoan language has three separate dialects, Tiwa, Tewa and Towa. The Pueblo nations share a belief that their purpose on earth is to follow the Creator’s instruction to care for one another and to care for the earth. When they stray from that purpose they lose their way and they lose harmony with creation and creation loses harmony with itself. 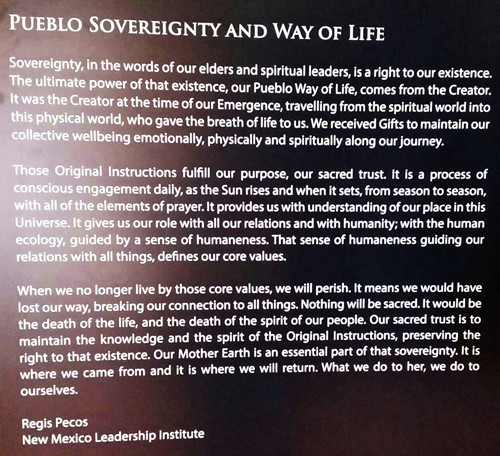 Since the 1600s The People of the Pueblos have been in a struggle for their survival. The Spanish inflicted Catholicism on the Pueblos, forcing them to build churches, forbidding the practice of their traditional ceremonies and demanding payments to the Church of goods and services. There were many other abuses as well. In 1680 the Pueblos rose up and drove the Spaniards out.

They killed 21 0f the 33 Franciscan priests who had been oppressing them. For 12 years they were completely free of Spanish rule. When the Spanish returned they were a bit more respectful of indigenous culture.

The rule of Spain became the rule of Mexico which gave way to the US. The attack on the Pueblo way of life escalated under the policies of the United States. Now the attack focused on the children who were forcibly removed from their families, their culture and their language and sent to boarding schools. Children had their hair shaved and their traditional clothing removed. Forced to speak English and severely punished for any attempt to practice their traditional beliefs, they were separated and isolated from their parents, grandparents and ancestors.

Despite every attempt by the US Government to annihilate the Pueblo way of life, somehow the Pueblos have persevered. By the 1930’s the culture and practices of the boarding school changed for the Pueblo Boarding School. Traditional rituals and language were no longer punished but encouraged. By the 1950’s the Boarding schools were shut down and the children were able to attend schools in their own communities. The Pueblo nations fought for and won recognition of their sovereignty rights. Despite these significant developments the people of the Pueblos continue to fight for real sovereignty of their land as they battle for water rights, mineral rights and against the overwhelming materialism of the dominant culture. They must also contend with the legacy Colonialism, racism and genocide that has left it’s mark on the spiritual and physical health of these remarkably resilient humans.

The Pueblo nations continue to mark the seasons with prayer, song and dance. They grow their traditional crops (the three sisters) corn, beans and squash. They engage in their traditional art forms of jewelry, weaving, drum-making, pottery and bead work. They continue to carry on their mandate to care for one another and to care for the earth. We would all do well to adopt that core value.