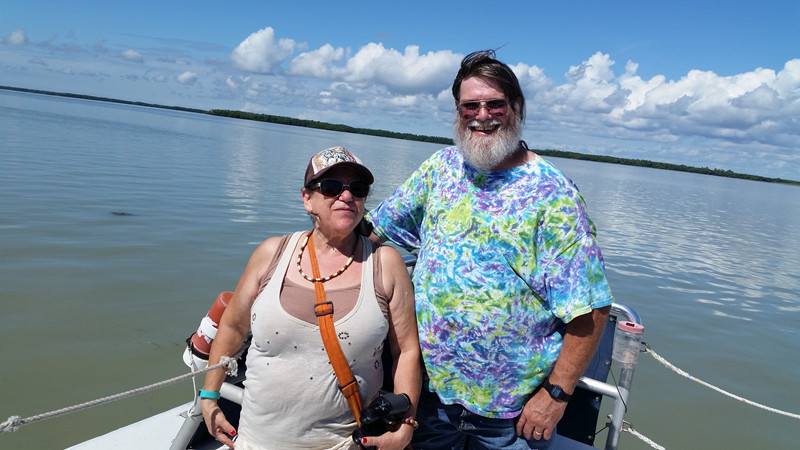 When I hit retirement age there were quite a few people that snickered "Going to go down to Florida and soak up the sun?" or some such phrase. Florida? Not a chance. There are too many old fogies down there jamming the roads and looking suntanned. No way I'm going to add another one to the crowd. But, like New York City, it's a great place to visit as long as you don't have to live there and we have several friends down there that haven't taken my advice.

It's kind of odd, but Judy, who isn't all that technically minded, has found several old friends (by old I'm talking 35 years since they have seen each other) on Facebook, but I, who spent my life with electronics and computers, can't find anybody from my youth in the cyberworld other than those high school friends my ex-wife has found. A case in point is her old friends Brad & Louise who are now living in Orlando, Florida.

They turned out to be very cool people, lots of good conversation and great hospitality. We visited several local parks and such, including the Orlando Science Center where we found this pile of turtles. 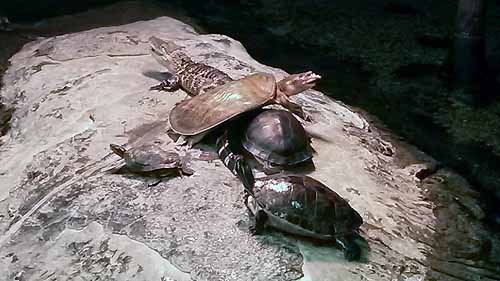 But for an old space junkie like me (I made scrapbooks of every space clipping I could find as a kid) the highlight was a visit to the Kennedy Space Center. 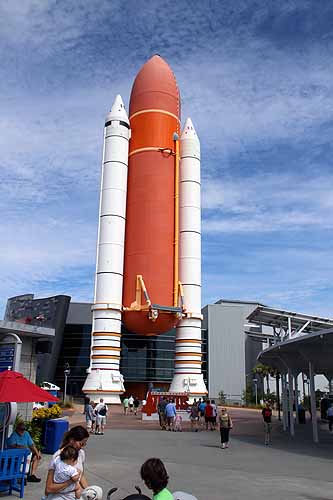 When NASA built the space center, they decided that most of the land around it should remain undeveloped, just in case something went terribly wrong with a launch. Thus was born the Merritt Island Wildlife Refuge and it is loaded with alligators, not to mention a wide assortment of other wild critters. As interesting as the wildlife might be, I was thrilled to see some of the actual hardware up close and personal. You know those rockets had to be big suckers, but standing next to them really brings the size home. 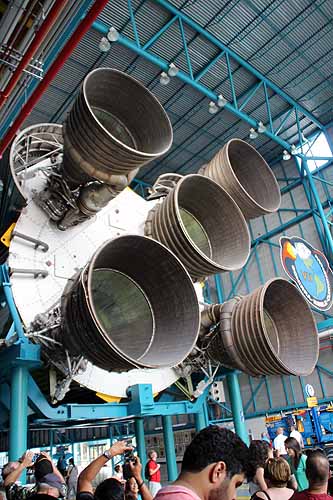 The displays at the Space Center are very well done, I practically had to be dragged out kicking and screaming when the place closed. The display of the shuttle was simply brilliant. 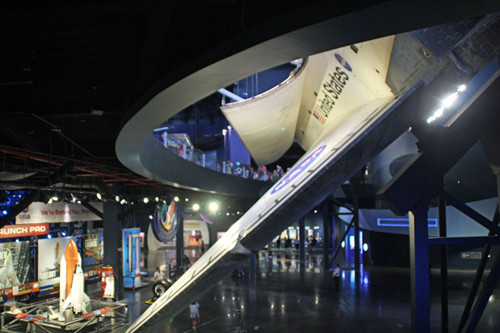 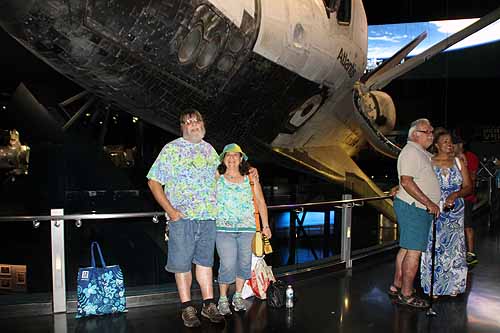 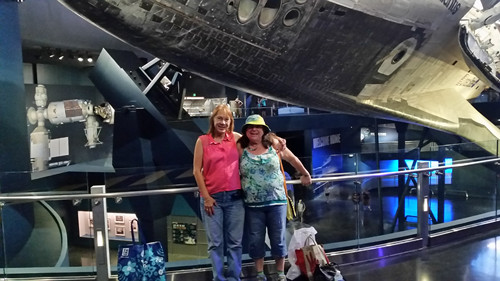 Judy with Louise. Somehow we never got a picture of Brad.

Amidst all the technological grandeur there was a note of whimsy, meet Snoopy the Astronaut. 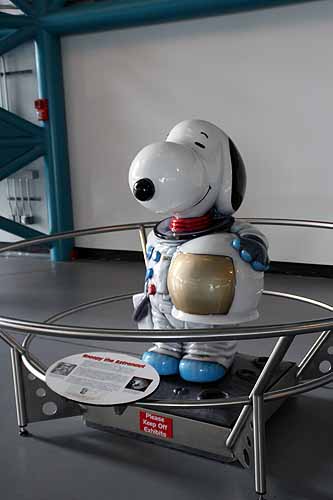 Would you believe we spent four days in Orlando and not one of them at Disney World? It's true, but we found plenty of things to do without paying $248.00 for a day with Mickey & Minnie.

Our next stop was Miami to visit Dave & Helga's grandkids. We found our alleged pull-through at the RV park had temporarily become a back-out because road construction had left a six foot drop at the exit of the park if we pulled through on leaving. Across from our spot we found the graveyard of the VWs, sort of like the place elephants are supposed to go to die. We made a note of it for Dave & Helga, they are still in love with their ancient VW camper but it has to die permanently one of these days.

It was great to see the girls again and their other grandparents, Chrissie & Chipa treated us like royalty - steak and crab legs for dinner. Chrissie and Chipa have been doing a magnificent job of raising the girls and it shows. Judy reveled in the Florida warmth and went swimming with two junior mermaids, but I remained high and dry with Chrissie - I'm not much for swimming. 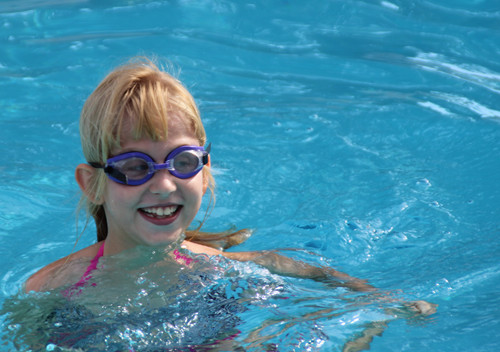 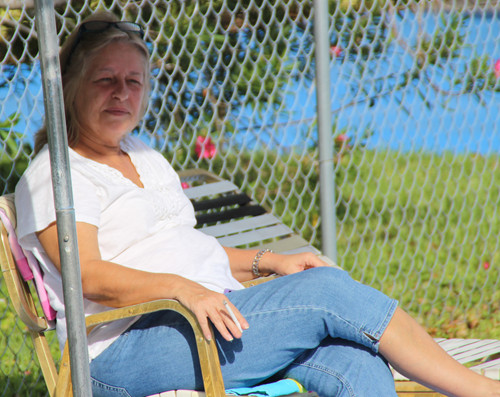 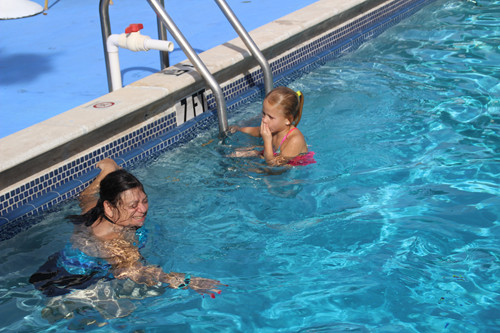 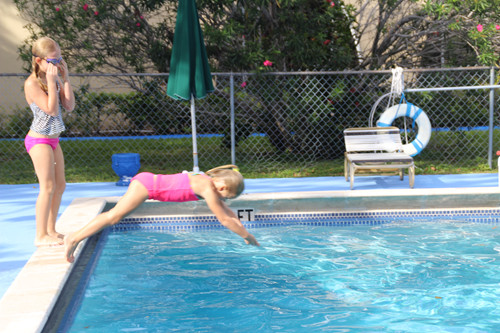 With many hugs and kisses we headed for the Everglades. I don't know about you, but the first thing that comes to mind when I hear the word Everglades is Alligators. The word vultures is not even a close second, but that's the first thing we found in the Everglades. Seriously, when we pulled into the parking lot at the visitor's center we found this sign by the entrance. 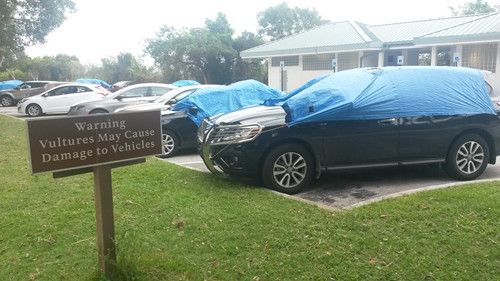 They supply a large box of tarps and bungie cords so you can cover your car. Vultures seem to think the rubber on your windows is a tasty snack and they will happily strip it away while you're viewing the scenery. Oddly, while we saw numerous interesting creatures, we didn't see a single vulture.

Now alligators we saw in profusion, mostly because we visited an alligator farm. We got to watch them feed the gators large chunks of chicken, unnerving if you're too close to those teeth. 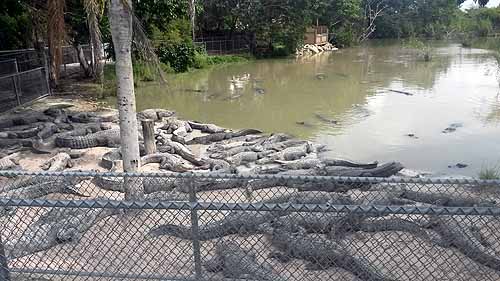 After demonstrating how powerful the critter's jaws were, the guy gave the gator a kiss. You'll notice he's sitting behind those choppers so they can't get a grip on him. Then came the traditional alligator wrestling match, but I learned long ago that is, if you'll pardon the expression, a crock. If you turn a gator over they immediately fall asleep; it's an autonomic reaction so as long as you can flip the bugger you win the match. Of course if you are a lousy flipper the gator gets lunch. 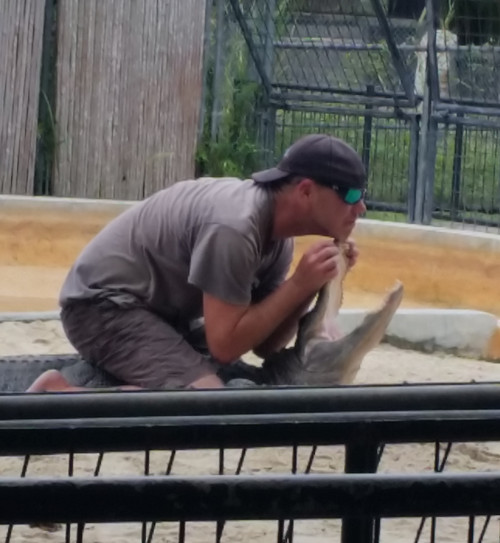 At the end of the demonstration Judy got to hold a baby gator. 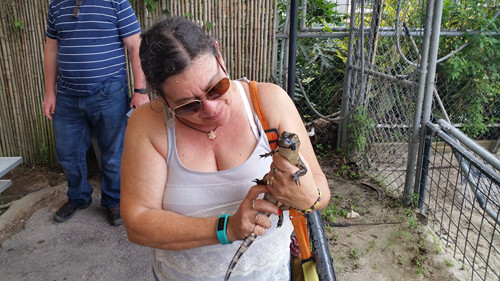 We splurged and went for an airboat ride, getting thoroughly soaked as the driver happily spun the craft around to create great, tourist-soaking waves. Along the way we were warned against swimming, as if that were necessary. 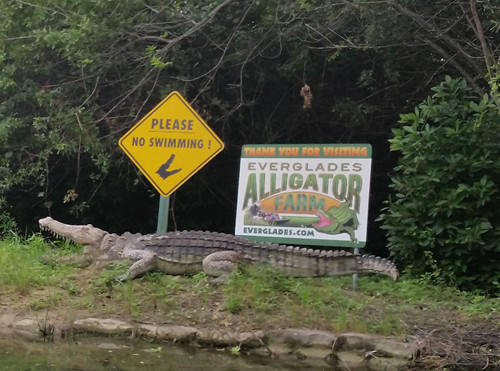 When we got to the Everglades National Park we got to see an American Crocodile, something that is rather rare since there are only about 2000 in the entire United States. He didn't seem to appreciate his rarity, he was just sunning himself near the observation platform on one of the lakes. 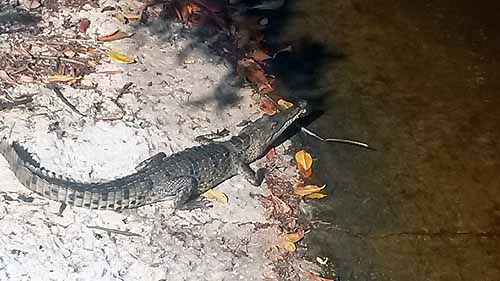 We took one of the tour boats into the ocean in hopes of seeing some of the more interesting sea creatures; that's where the picture at the top came from. Alas, the only other animals we saw at sea were the guide and the boat captain. I guess sighting the croc used up our luck. We did spot a couple of manatees in the harbor, but the water was very murky and we didn't see them too clearly. Here's the best picture we got. 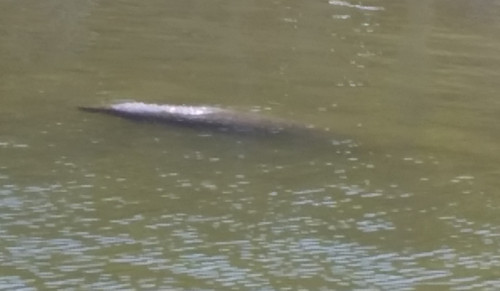 The Everglades are a fascinating place, and practically deserted since we arrived just before the peak season started, but we didn't have time to spend more than a day there if we were to make it to Austin on schedule. Maybe next year.

I'll pause here for a word about Florida roads: TOLLS. If you want to get anywhere you are pretty much stuck using the toll roads, and by the way - they won't accept cash at many of the exits. Seems the Florida legislature hasn't looked at any US currency lately; you know the par about This note is legal tender for all debts public and private. Well, they are Republicans, after all. We now have a Florida toll transponder, you can buy them at all the rest areas if you want to get off the turnpike. Somehow the refrain for Charlie and the MTA kept running through my head.

We hung out at the beach, where I got to sit around as one of the park rangers explained to a teenager what to expect from a stingray sting he just acquired. It boils down to pain, and boiling is an apt word to describe the pain. It seems they get two or three stings a day at the beach and have their own clinic for the more nasty cases. If you want to read about the gory details, here is a web site that will fill you in. It was an interesting way to spend an hour or so while Judy and Maureen were cavorting in the ocean, thankfully not collecting any stings of their own.

We were too cheap to rent one of their dune buggy bicycles, but we took some pictures. 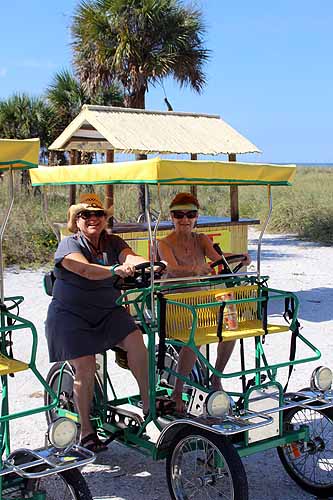 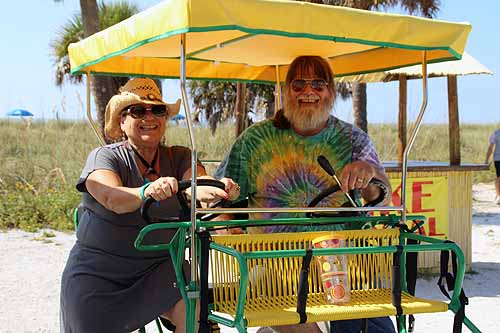 We spent some time at the Dali Museum, a fascinating place. I'm not much of an art lover, but it was very interesting to see how his style changed over the years and to learn about the artist himself. If nothing else you have to love the guy's moustache! We actually got a two-for-one treat, as they had a special exhibit of Escher's works a well. 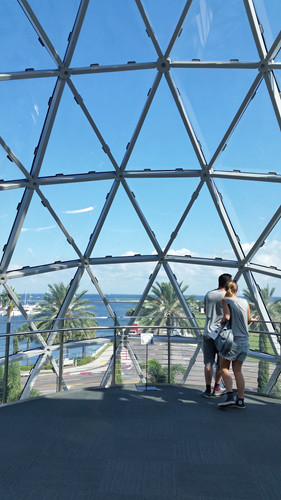 I mentioned a while back that we wanted to be in Austin on time, that is on time for a concert by our friend and marvelous folksinger Joe Crookston, so we hightailed it from Florida to Texas in only five days. Our intention was to just keep going, camp and go again in the morning, but, as usually happens, it didn't work out quite that way. However, this time the surprises were good ones.

Monday was Tallahassee FL, Tuesday was Mobile AL, Wednesday was Lafayette LA, Thursday was Houston TX and Friday brought us to Austin. The real fun happened on Tuesday, when we pulled into the Wales West RV Resort & Light Railway RV Park.

RV Park and Light Railway, you ask? Yup, the owner took a trip to Wales and fell in love with the light rail trains they used to use to haul coal. In fact, he loved them so much he bought a couple of engines and the hardware to build his own rail cars and set up a railroad around the campground. Now that's pretty cool, but he didn't stop there. We arrived just after Halloween and found that they go all out to decorate for the holidays. Not just a pumpkin or two and an old sheet for a ghost, but everywhere there were lights, decorations and dioramas. When you took a trip on the railroad you passed dozens of dioramas. We had a ball. 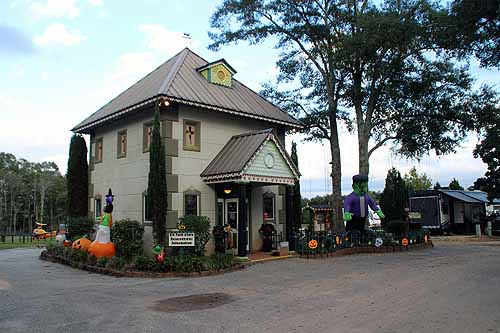 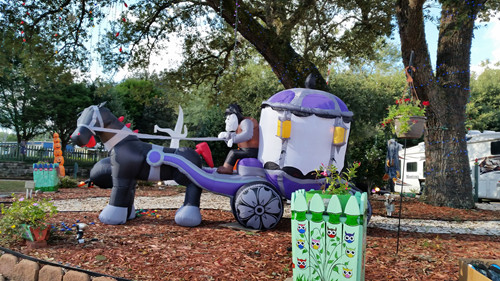 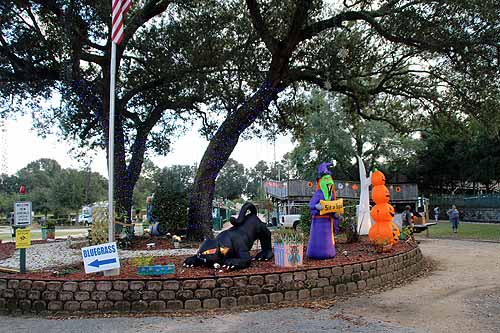 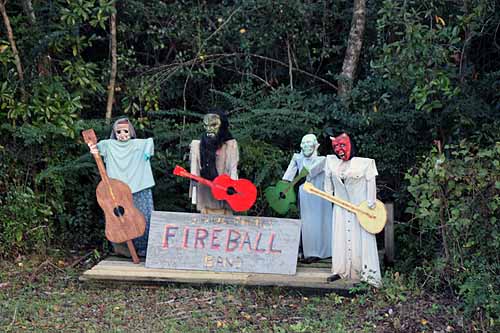 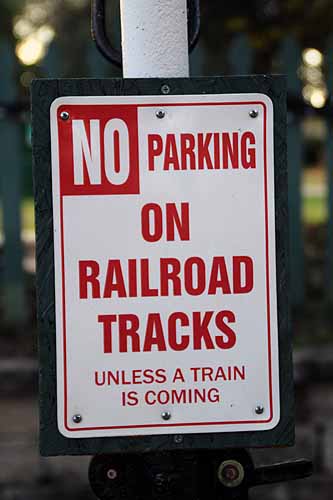 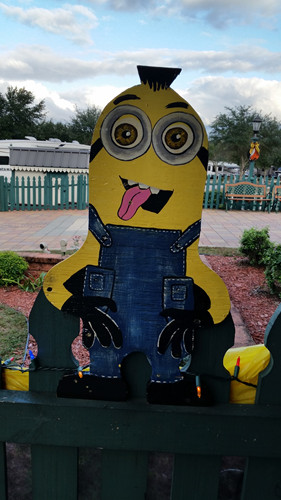 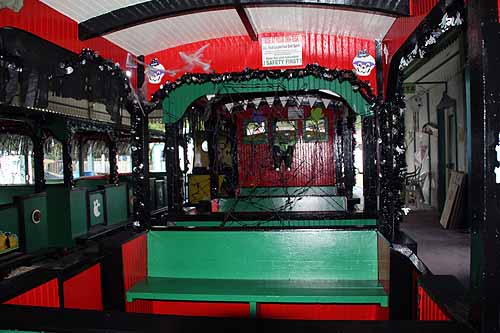 As if that weren't enough, they had an indoor pool with a jacuzzi. To top it off, Tuesday was Bluegrass Night so we got to hear a great little band and go for a night ride on the train after the concert. This is the joy of traveling, every once in a while you find something completely unexpected, something that makes life just that much sweeter.

We had one more treat on the way to Austin, where we met son-in-law Scott's parents for dinner. They are delightful people, as I related in our blog about last year's Christmas Chaos. We had a very pleasant evening together. Afterword we got to watch a lovely sunset across the lake in our RV park. 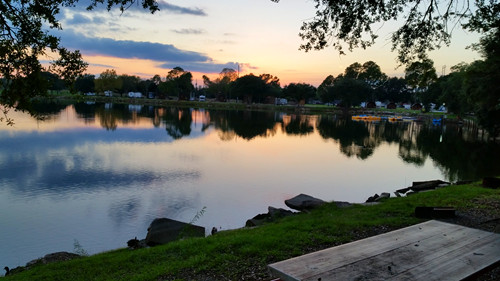 We did arrive in Austin on time to hear our buddy Joe Crookston and settled in for a much warmer winter than you find in Rochester. There's nothing like reading about your Facebook Friends coping with winter when you have to cope with temperatures in the seventies. Sorry, Facebook Friends, but I do have to gloat!